Vauxhall and Opel reveal their vision of the future sports car with the GT Concept at this year’s Geneva International Motorshow, 3-13 March 2016.

Purebred, pared-down, yet unashamedly avant-garde, the GT Concept is even shorn of door handles and door mirrors. Its breathtaking form clothes a classic front mid-engined, rear-wheel drive chassis that will appeal to driving enthusiasts. 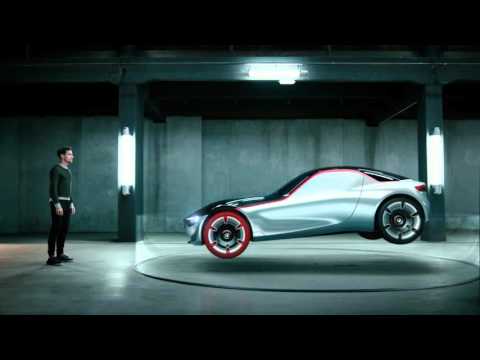 A HOMAGE WITH INNOVATION

While the GT Concept is forward-thinking – encapsulating Brit designer Mark Adams’ philosophy of ‘Sculptural Artistry meets Technical Precision’ – its name mirrors that of the 1964 GT Concept, the first styling model to be produced by the nascent Vauxhall Design & Engineering Centre in Luton, which opened the same year.Importantly, it also pays homage to two significant motor show cars: the 1966 Vauxhall XVR and the 1965 Opel Experimental GT. The 2016 GT Concept is also a logical step on from the innovative and beautiful Monza concept from 2013.

‘GT Concept’ was the name given to a remarkably prescient and rakish, full-sized styling model, the first of its kind from Vauxhall’s new-for-1964, £2.25m Design & Engineering Centre in Luton, which became the leading centre of its kind in the UK for the next two decades. But two years later it was a radical show-car that really put the Centre on the map.

Built to showcase Vauxhall’s design innovation and autonomy in the mid-Sixties, the XVR (Xperimental Vauxhall Research) had a simple purity of line, gull-wing doors forming a unique split windscreen, a clam-shell bonnet and pop-up headlights.

Three cars were built, including a 100mph driveable vehicle with a pre-production 2.0-litre engine producing 100bhp. And while the car never reached production, design cues like the ultra-slim rear lights could later be seen in Vauxhall’s Viva HC and Firenza models.

Opel’s Experimental GT, however, did become a production reality. First shown at the Frankfurt Motor Show in 1965, it broke the mould for European concept cars. A sleek and low-slung coupe, the Experimental GT was the product of Opel’s new-for-1964 design centre in Rüsselsheim.

Fifty years later, the GT Concept once again showcases Vauxhall and Opel’s pioneering spirits. Reinforcing its appeal to driving enthusiasts, the car has a red signature line that splits the vehicle body horizontally and proportions it. The distinctive red tyres are a reference to an iconic Opel motorbike from the 1920s – the Motoclub 500 – which sported red-coloured rubber.

The GT Concept’s front-mid engine configuration keeps the car’s centre of gravity low and central for excellent dynamics. Beneath its stretched bonnet is a powerful 1.0-litre, three-cylinder turbocharged engine, based on the all-aluminium unit used in the ADAM, Corsa and Astra. The engine delivers drive to the rear wheels via a six-speed sequential transmission operated by steering-wheel mounted paddle shift. Weighing under 1000kg, the GT Concept accelerates from 0-62mph in less than eight seconds has a maximum speed of 134mph.

Another unique feature of the GT Concept is its integrated headlamp/indicator units. The lights have a three-dimensional beam which allows glare-free high-beam driving. Based on Vauxhall/Opel’s award-winning IntelliLux LED matrix lighting, the GT Concept sees the intelligent lighting system’s next stage of development.

Required cookies are essential to let you move around the website and use its features, such as accessing secure areas, shopping baskets and online billing. These cookies allow our website to provide services at your request.

Functionality cookies are used to remember the choices you make, e.g. your user name, log in details and language preferences. They also remember any customisations you make to the website to give you enhanced, more personal features.

Targeting cookies collect information about your browsing habits to deliver adverts which are more relevant to you and your interests. They also measure the effectiveness of advertising campaigns.

This site uses cookies and related technologies for site operation, analytics and third party advertising purposes as described in our Privacy and Data Processing Policy. You may choose to consent to our use of these technologies, or further manage your preferences. To opt-out of sharing with third parties information related to these technologies, select "Manage Settings" or submit a Do Not Sell My Personal Information request.